Mepantigan, meaning “to throw” in Balinese, is a unique form of martial arts in which the main objective is not self-defense, but rather to act as a medium to educate people about nature, empathy, and discipline.

It takes place in muddy rice fields that sprawl across the Ubud agricultural landscape. Sometimes the tradition is carried out on a soft sandy beach, but it is more frequently practiced in the mud, hence it is known fondly by many tourists as Balinese mud-wrestling. Of course, there is more to Mepantigan than just mud wrestling.

The ceremony is just as important as the duel itself. A priest leads the participants to pray to Dewi Sri, the Hindu goddess of prosperity. Then music, hymns, and rhythm of the gamelan decorate the air as competitors demonstrate their knowledge of the martial art. This involves intricate movements, somersaults, and chanting — not a battle cry — to help judges and competitors gain confidence in his or her abilities. Mepatigan instills its positive values by challenging attitudes towards violence, and its ‘duels’ or ‘battles’ are often referred to as ‘shows’.

A performer and his or her competitor bows and embraces each other before the show begins. According to customs, the performers wear traditional Kamen sarongs and a headcover. The males perform without any shirt on, while the females wear a simple T-shirt on top of the Kamen. When the duel begins, each performer attempts to lock the opponent and perform a successful knockdown by throwing. There are strict rules: no inflicting damage, such as biting, pulling hair, punching or kicking. For a knockdown to count, the opponent must be thrown using a specific set of techniques; pushing or pulling the opponent to fall does not qualify. 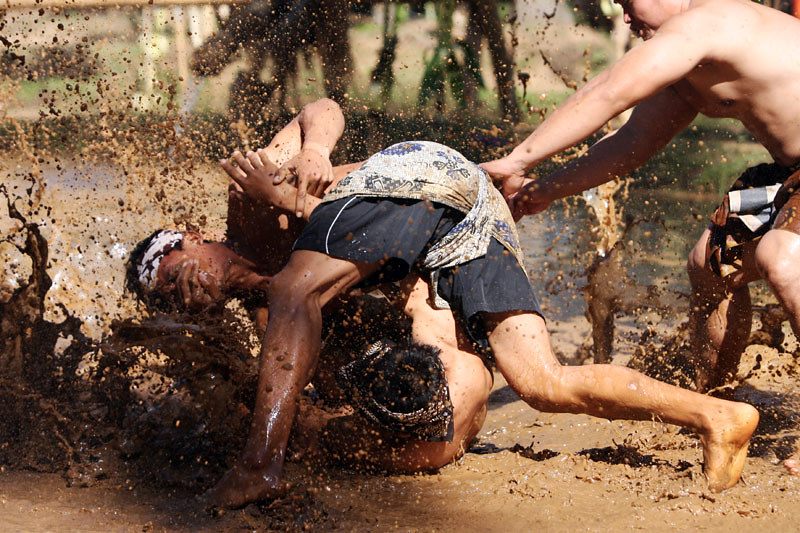 In addition, judges assess the attitude or psychology of each competitor. A good performer balances between restrained, disciplined aggression, as well as compassionate politeness, which is often subtle within the act of the wrestling. Not surprisingly, most points are earned from this assessment.

When the bamboo clock runs out of the water after three minutes, the game ends. Each performer bows embraces, and walk off as men and women of peace.

You can join the fun and enjoy the health benefits of the practice by visiting Pondok Mepantigan Bali in Batubulan, Gianyar. Don’t know where to stay in Gianyar? Mara River Safari Lodge is in a very strategic location. If you stay for three days and two nights, you not only gain access to Bali Safari Park for free, but you are also much closer to panoramic waterfalls and terraced rice fields in the Ubud-Gianyar area.