In a rocky forest of Tampaksiring, Gianyar, a Dutch archeologist discovered an ancient ruin that predates the era of the Balinese Kingdoms. These ruins were unlike any other. Usually, what survives across time are grand ancient memorials and temples. But what was discovered back in 1923 was a cave, Goa Gajah – a lonely, reclusive meditation cave that is guarded by fierce carved faces.

Stepping inside a literal gaping mouth of the cave gives a reminiscent feeling of entering the Cave of Wonder from Aladdin. But instead of a tiger mouth, the mouth is a carving of a creature far more menacing than a tiger. It has to be menacing – it must drive evil spirits away. 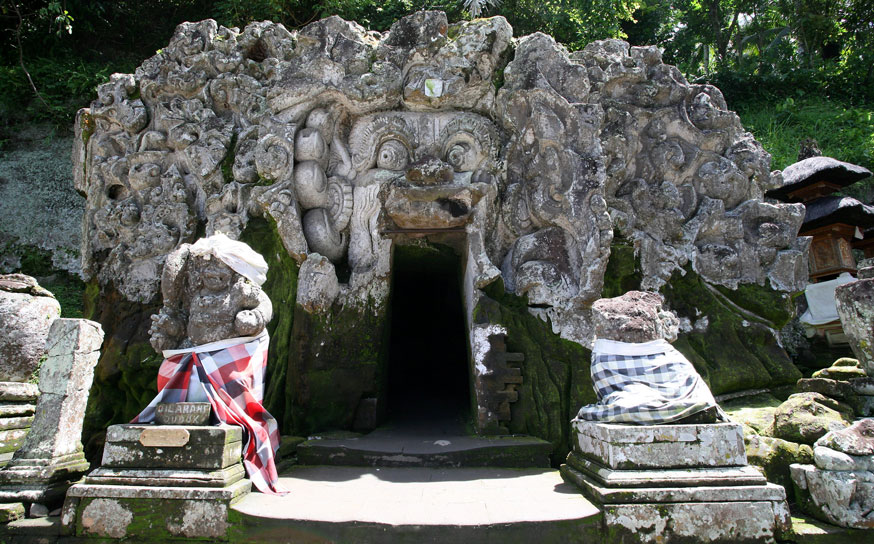 The name of unknown origin

Goa Gajah literally translates to “Elephant Cave”. Despite the name, you will find no elephant anywhere in the cave nor on the archeological site. Historians believe that the name may have come from the first figure that occupied the cave – Ganesh, the Hindu god of wisdom, who has a distinct figure of a man with an elephant head. Another theory suggests that the name may have been derived from the river that cuts through the complex, which was called Lwa Gajah before it was renamed Petanu in the present day.

Regardless of the strange naming convention, Goa Gajah still holds a shroud of mystery. In 1954, more ruins were discovered. This time it was a bathing pool with seven statues each holding a vase pointing towards the pool as if to be emptied. Engineers have figured out how to make the vases work as originally designed; a stream of water once sprouted from each vase to fill the pool that had been dry for centuries. But one of the seven statues had been badly damaged from earthquakes, long before the discovery. It was confirmed that seven of these maiden figures represent the seven holy rivers of India: Ganga river, Sarasvati river, Yamuna river, Godavari river, Sindhu river, Kaveri river, and Narmada river. 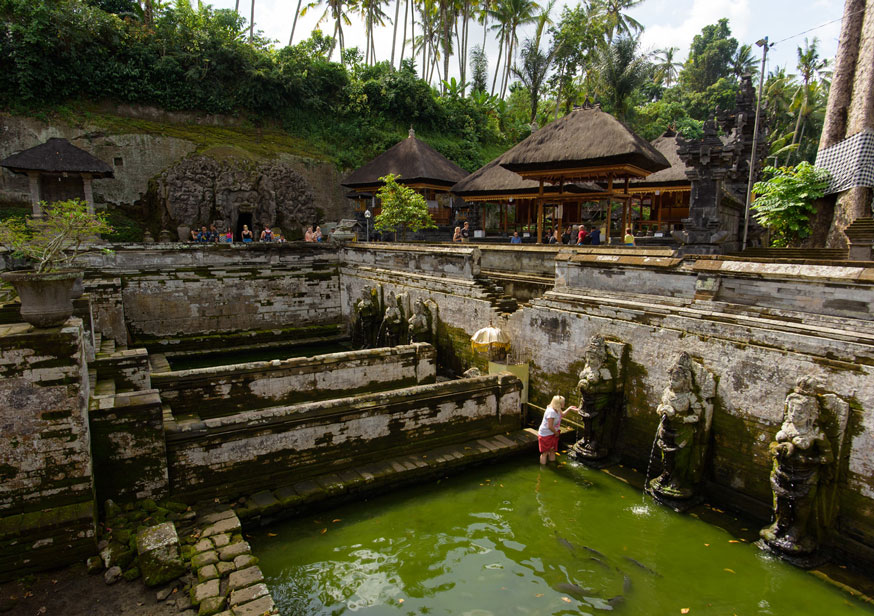 On some stones, there appear to be smooth indents where priests used to sit and meditate centuries ago. There were clues from carvings and statues that the site was once not only a shrine for Hindu gods but also a devotional space for Buddhists. Today it is still considered a sacred site. Visitors who want to enter the prayer cave must wear a sarong and sash around their waist. Silent prayers and the tangy-sweet smell of burning incense fills the air, which depicts a possible scene of what people did here some 900 years ago.

To visit Goa Gajah in Gianyar, you need a strategic place to stay. The Mara River Safari Lodge in eastern Bali offers irresistible packages for your accommodation needs. Not only will you experience unique encounters with wildlife from Bali Safari Park, but you are also quite close to the many cultural and culinary experiences Bali has to offer.