Belongs to the parrot family, this species most distinguishable from other parrots due to their long tail and colorful feathers. They also famous for their title “New World Parrots” or “Neotropical Parrots”. Let’s learn about this kind of parrot – The red-and-green Macaw! 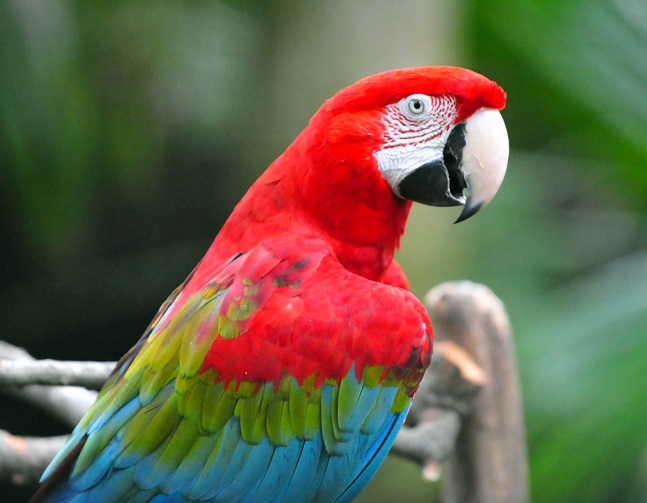 The red-and-green Macaw (Ara chloropterus) is a largest and mostly-red macaw of the genus Ara. Although listed as “Least Concern” according to IUCN Status, we should be aware about their existence. In recent years, their numbers keeps declining due to habitat loss and pet illegal trading.

This birds have widespread in the forests and woodlands of northern and central South America. The red-and-green Macaw have flocks along the northern and southern borders of the Amazon rainforest and sparsely within the rainforest. They also more common in areas rich in canopy-emergent trees for nesting cavities during the breeding season.

In terms of body length, this species is the second largest compared to Hyacinth Macaw – which is the largest Macaw. Their chests colour up to head are bright-red, and the upper-wings are mostly green, then change to blue outwards. In addition, they have red lines around the eyes formed by tiny feathers on the otherwise bare white skin patch.

Here are some interesting behaviour about the Macaw, and why you should pay them a visit! First, Macaws are normally monogamous or having only one mate in life. The female typically lays two or three eggs in a nest made in a hole of tree. The female incubates the eggs for about 28 days, and the chicks fledge from the nest about 90 days after hatching.

Another unique behaviour is Macaw often flock to mountain of clay known as “macaw licks” in the wild. They will licks clay containing minerals and salt that is essential to their diet. But still, they are primarily granivorous – mainly consuming seeds, also nuts and fruits.

Let’s give your support to protect these beautiful Macaw together with Bali Safari Park!