A Visit to the Historical Taman Ujung in Karangasem

Far from bustling South Bali lies a hidden historical gem – a serene Dutch-Balinese water palace with a surprising history. It is located about 5 km southeast of the pleasant town Amlapura, very close to the eastern Bali coastline.

If you’re a big fan of history and culture, particularly of Balinese and Indonesian history, then Taman Ujung Palace in Karangasem will be a great destination for you.

Resort for the Last King of Karangasem 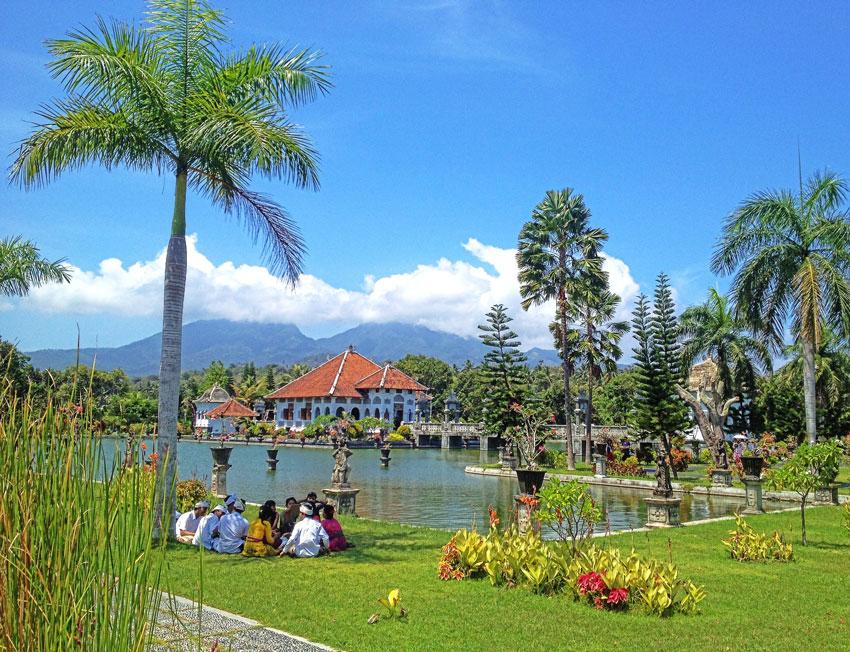 You may have learned that Bali used to be controlled by several monarchs until around the mid-1940s when Indonesia gained independence. Karangasem was ruled by I Gusti Bagus Jelantik (1887–1966) who built Taman Ujung Palace (officially named Sukasada).

The 10-hectare palace complex houses two lakes, each with structures on artificial islands that were intended as peaceful sanctuaries for the king. The larger house was also used as a meeting place to welcome foreign delegates.

One of the many unique features of the water palace is the architecture. You may notice that it has a Dutch-influenced architecture that seems to be intertwined with local artistry. The houses on both islands are connected by narrow bridges with Balinese carvings, statues, and stone decorations.

How to get to Taman Ujung Palace from South Bali

We suggest you follow the Sanur Bypass if you are unfamiliar with navigating the many roads of Denpasar.

Once you head north via the Sanur Bypass, make your way to Jl. Prof. Ida Bagus Mantra that hugs the eastern coastline. You will pass Bali Safari Park and continue on the road in the northeast direction, through winding hills and beautiful rice terraces at the edge of the sea.

The road changes names many times, though continues until Amlapura, where it is easy to find Taman Ujung Palace, as it is a famous heritage site.

The lake already existed long before it was modified and before the palace was built around it. According to local legend, it used to be a dirah, a ‘disposal’ place. So, what did the villagers and village chief attempt to dispose of you ask? Well, witches and criminals.

Yes, you read that correctly. A dirah is a place of public execution for people who possess the dangerous ability of black magic. In Bali, the culture of mysticism is quite strong even in the modern globalized world, so imagine how strong it must have been hundreds of years ago.

Black magic and laws against certain illegal practices were always at odds with one another, which is why a dirah was used in many different places across the island.

Why King I Gusti Bagus Jelantik repurposed a dirah as none other than a royal recreational sanctuary is beyond question. Maybe it’s because of the beautiful location. From the elevated west side of the palace, you can appreciate the eastern sea and even a sunrise if you come here on time.

Stay at Gianyar and travel just under an hour to Karangasem

If you wish to explore Gianyar and Karangasem, there is one place where you can stay – Mara River Safari Lodge. It’s a safari-themed hotel that is part of the Bali Safari Park complex. If you book a lodge here, you are welcome to enter the animal park at any time of the day. Learn about our special offers on our official website!