The gamelan orchestra transports you to the mystical side of Bali. Every beat of the bronze gongs and ancient xylophones draws you closer into a curious yet unknown world.

Two monkeys enter from the stage curtain, along with the antagonist. Speaking in coarse Balinese, the witch incites an evil scheme, which allows more characters to enter the stage, including the Barong – the good Spirit King. Their clash determines the fate of the old Balinese kingdom. 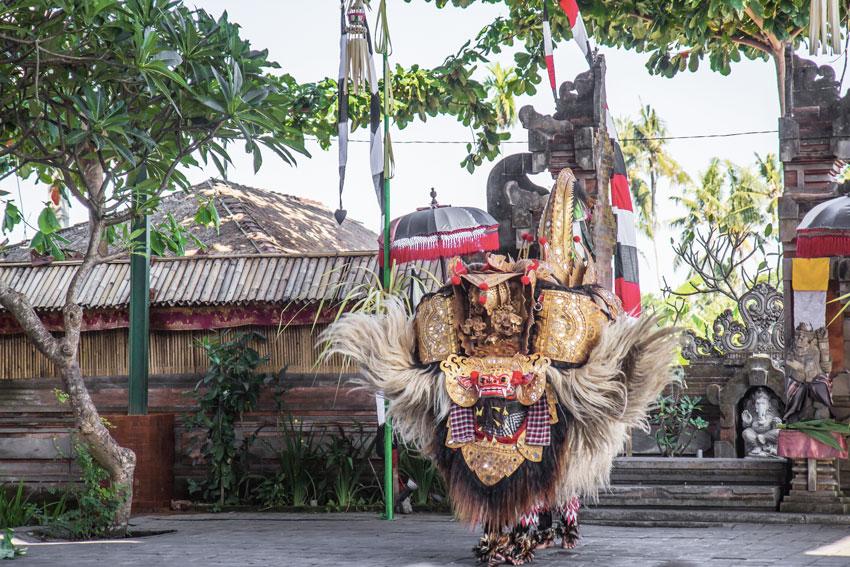 Witnessing the Barong in the Calon Arang myth

The iconic Barong and its unique dance bring the vast Balinese mythology to life. One famous legend is Calon Arang, one of Bali’s myths about the battle between good and evil.

Calon Arang is a centuries-old performance that transcends all cultural barriers. It’s an epic with a great focus on dance, movement, facial expressions, voice, music, and costume.

Central to the plot of Calon Arang are the characters Barong and Rangda, both opposites in nature. Rangda is a human, gifted with black magic who uses her powers for evil.

She is ill-tempered, destructive, and has no regard for innocent life. The actor of Rangda may often fall into a trance while performing. Performing the character is demanding due to Rangda’s inherent negative magical aura. The performer is usually a respected individual in his community for such feats.

In the story, Rangda becomes furious that no man has dared to marry her daughter since everyone is so fearful of Rangda’s black magic. She reacts by cursing the entire village by bringing a plague in an attempt to punish not just the men, but the women and children too.

Upon hearing the news, the 10th-century Balinese King Erlangga decided to stop the mystical powers of destruction, by deploying an army of mortal men. To the Balinese people, magic exists not only in fairytales, but it is also a very real aspect of everyday life, even in modern times.

As you may have guessed, Rangda bewitched the king’s army against him; they point their keris blades against their own neck and start to stab themselves to death.

When evil seems to prevail, Barong comes to the rescue

Realizing that he can’t stop the witch, the King cries for help to the benevolent Barong, a spirit king who protects villagers on the island. Barong responds to the cry and enters the stage.

He looks nothing like you’d expect when you hear “benevolent and protective spirit king”. Barong looks like a beast – a combination of a bat, dog, and lion, being slightly taller than a grown man. He is covered with masterful decorations such as cow-hide carvings, gold plates, and gold-and-black fur made of plant fibers.

In the presence of Barong, the king’s men who fell into a trance are awoken and are able to fight off Rangda.

Stories like these never end with the defeat of Rangda; that would never happen since evil (adharma) will always exist as long as good (dharma) exists, although the latter would always prevail, according to their belief.

Where to watch traditional barong dance in Ubud

We recommend these places in Ubud where you can watch Calon Arang and the Barong Dance. At the time of writing, the entrance fee is around Rp 100,000.

You may also find the barong dance being performed at Galungan and Kuningan Festivals. In some places, barong performers visit people who are sick, to ward off evil spirits for a speedy recovery.

The perfect place to stay close to Ubud’s cultural action is the Mara River Safari Lodge. Check out our special offers by clicking on the link.